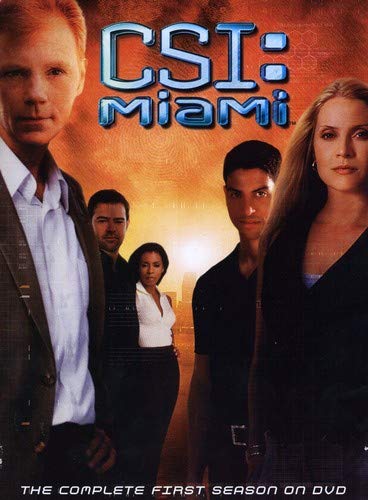 David Caruso, Emily Procter, Kim Delaney. From the creators of the original hit series comes this action-packed spinoff featuring the same brain-busting crimes to solve, set in the steamy streets of South Florida. 25 episodes on 7 DVDs. 2002-03/color/18 hrs/NR/widescreen. .com ---- As Lt. Horatio Caine (David Caruso) notes in episode 4 ("Just One Kiss"), "The evidence, as always, will speak for itself." In other words, CSI: Miami follows the same super-successful formula as CSI: Crime Scene Investigation ( /exec/obidos/tg/stores/series/-/72428/%24%7B0%7D ). Fortunately, this instantly popular spin-off established its own unique identity from the start. Like CSI, the Dade County criminalists of CSI: Miami solve murders using forensic science. Unlike the Vegas crew, however, they're cops with the power to arrest, their coroner (Alexx Woods) talks to dead people, and almost everybody speaks Spanish. Sometimes their crime scene is a swamp, sometimes a resort hotel. Either way, the skies are always sunny--the gators always biting. Real-life Florida resident Caruso is joined by Khandi Alexander (NewsRadio) as Woods, Emily Procter (The West Wing) as ballistics expert Calleigh Duquesne, Adam Rodriguez (Roswell) as underwater recovery expert Eric Delko, and featured player Rory Cochrane as Tim "Speed" Speedle. Cochrane (Dazed and Confused) wouldn't become a full-fledged cast member until the 12th episode ("Entrance Wound"). Meanwhile, Kim Delaney (Caruso's former NYPD Blue cast mate) wouldn't join until the first ("Golden Parachute"), but left after the 10th ("A Horrible Mind"), reportedly due to a lack of chemistry with Caruso. Just as CSI has made the most of its location with stories about showgirls and casino owners, so has CSI: Miami exploited its surroundings for all they're worth. Pilot episode "Cross-Jurisdictions" (a crossover with CSI), for instance, was loosely based on the murder of Miami-based designer Gianni Versace. Other notable episodes include "Camp Fear" with Joan of Arcadia's Amber Tamblyn as a detention camp cadet and "Dead Woman Walking" with Karen Sillas (Under Suspicion) as a victim of radiation poisoning. Like its parent program, CSI: Miami quickly became a ratings powerhouse and was followed by CSI: New York in 2004. --Kathleen C. Fennessy
Show More
Reviews

Disclaimer: The price shown above includes all applicable taxes and fees. The information provided above is for reference purposes only. Products may go out of stock and delivery estimates may change at any time. Desertcart does not validate any claims made in the product descriptions above. For additional information, please contact the manufacturer or desertcart customer service. While desertcart makes reasonable efforts to only show products available in your country, some items may be cancelled if they are prohibited for import in Azerbaijan. For more details, please visit our Support Page.