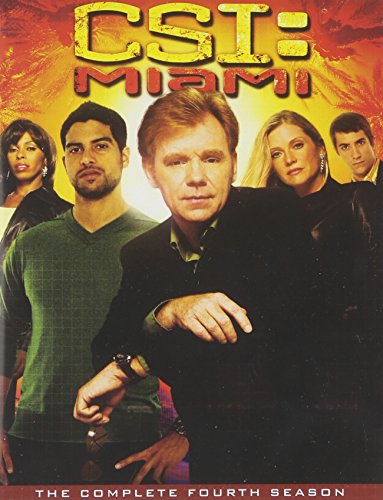 Join lead criminalist Horatio Caine (David Caruso) and his state-of-the-art forensics team as they investigate hot and steamy Miami crimes using cold hard facts. The CSI: Miami Season 4 Complete DVD Collection features 25 episodes of riveting and shocking mysteries. The evidence leads into seedy nightclubs, privileged suburbs and explosive family secrets. The stakes are higher than ever before, because this time it's personal. .com ---- A marriage, a murder, and a mole all play relevant roles in the fourth season of CSI: Miami. Easily the most stylistic show in the CSI franchise, the series stars David Caruso (NYPD Blue as Horatio Caine, the lead investigator with the Miami Police Department. With his black clothing, Caine stands out in a sea of pastel-clad colleagues that include ballistics expert Calleigh Dusquene (Emily Procter), underwater recovery whiz Eric Delko (Adam Rodriguez), and medical examiner Alexx Woods (Khandi Alexander). Speaking in an even-keeled tone, Caine's one-liners effortlessly roll off his tongue in the same manner as Law & Order's Lenny Briscoe (Jerry Orbach). When a philandering husband--whose DNA is being collected--excuses his behavior by saying, "So I'm human," Caine zings back, "Yeah, too bad there's not a swab that can confirm that." On the 25 episodes featured in this 7-disc set, he doesn't scream or shout once. When alarmed, Caine lets his gun make his more salient points. Actually, he and the other CSIs seem more proficient with their weapons than the FBI that sometimes "backs" them up. Who needs a sniper when Horatio is there? The generally good-looking cast also spends more time in the field than in the crime lab, giving them plenty of opportunity to bask in the sunshine and mingle with the bikini-clad beauties that seem to populate Miami. Even semi-regular cast member Joel West, who plays a police officer, is a former Calvin Klein model. The season, which ran during 2005-2006, includes a crossover episode with CSI: New York. Unfortunately, only the Miami segment is included on this set, leaving viewers to wonder what happened in Part 2 when Caine and Mac Taylor (Gary Sinise) team up to capture a serial killer who locks children in the closet while he murders their parents. Still, there are some excellent episodes on this set, including one where a team of scam artists pose as father and children to steal a slew of money from the local country club Richie Riches. Another involves a group of college kids intent on recreating the violence they've played on a Grand Theft Auto-type of videogame. In many ways, this season is more about style than substance. Why else would there be avant-garde subtitles for one sequence where the criminal is speaking perfectly coherent English? More so than in previous seasons, there is a soap opera mentality to the show that's entertaining, but out of place in this series. Horatio is involved in a doomed romance, there's a romantic triangle between colleagues, and all too much is made of a possible mole within the lab who is leaking confidential information. While Caine's whispered threats lend a certain entertaining cachet to the show, his preening gets old fast. When he enters a room, Caine plants himself into a theatrical stance that makes him look less like a tough guy than one of Charlie's Angels. Too bad there's not a swab that can fix that. --Jae-Ha Kim
Show More
Reviews

Disclaimer: The price shown above includes all applicable taxes and fees. The information provided above is for reference purposes only. Products may go out of stock and delivery estimates may change at any time. Desertcart does not validate any claims made in the product descriptions above. For additional information, please contact the manufacturer or desertcart customer service. While desertcart makes reasonable efforts to only show products available in your country, some items may be cancelled if they are prohibited for import in Azerbaijan. For more details, please visit our Support Page.